The end of the world has come a lot closer in the past three years, with every single person now in danger as climate change and nuclear weapons pose an escalating threat – according to the scientists behind the Doomsday Clock, a symbolic measure which counts down to armageddon.

via Doomsday clock: We are closer to doom than at any time since the Cold War, say scientists – Science – News – The Independent.

The Pillars of Creation is one of the most iconic images ever taken by the Hubble Space Telescope.

In 1995, the telescope provided the first views of three towering spires of cold molecular hydrogen gas, dust and newly forming stars that lie within M16, the Eagle Nebula, located some 6500 light-years from Earth.

via The Pillars of Creation show their dark side › News in Science (ABC Science).

Animals that live in cold, stable environments may suffer more as the climate changes, suggests new research on the ability of mosquitofish to deal with temperature increases.The study, published today in the journal Royal Society Open Science, showed that mosquitofish acclimatised to live in colder water did worse when temperatures were raised.”Our research shows that some animals that live in colder climates now will suffer as temperatures becomes more variable due to climate change,” says Dr Frank Seebacher from the University of Sydney.

via Cold climate animals may suffer as world heats up › News in Science (ABC Science). 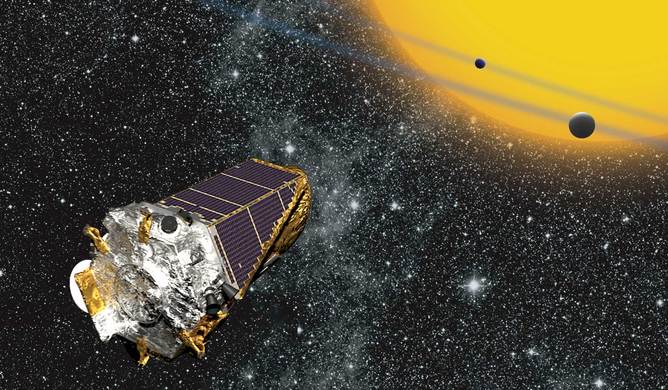 More than 1,000 exoplanets have now been discovered by the Kepler Space Telescope, announced NASA this month, and the figure continues to climb.

Three of the newly confirmed Kepler planets are thought to lie in the habitable zones of their host stars and are only slightly larger than the Earth.

via The tools needed to seek out new worlds out there in space.

The Earth’s climate has always changed. All species eventually become extinct. But a new study has brought into sharp relief the fact that humans have, in the context of geological timescales, produced near instantaneous planetary-scale disruption. We are sewing the seeds of havoc on the Earth, it suggests, and the time is fast approaching when we will reap this harvest.

via Humanity is in the existential danger zone, study confirms.

Coral reefs are the poster child for the damage people are doing to the world’s oceans. Overfishing, pollution and declining water quality have all taken their toll on reefs around the world. Perhaps the most famous example is Australia’s Great Barrier Reef, where half of the coral cover has disappeared over the past 25 years.

via Obituaries for coral reefs may be premature, study finds.