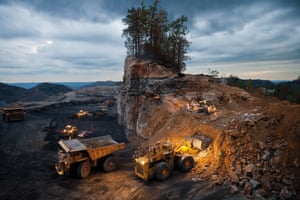 Environmental artist J Henry Fair captures the beauty and destruction of industrial sites to illustrate the hidden impacts of the things we buy – the polluted air, destroyed habitats and the invisible carbon heating the planet‘Beauty and horror’ in the industrially scarred landscapes of south Wales

Source: Industrial scars: The environmental cost of consumption – in pictures | Environment | The Guardian

THE SOUND OF A LOUD THUD STARTLED CLAIR JONES, interrupting a quiet December night in her ground-floor Salt Lake City apartment. Something had hit the sliding glass door in her living room. Another thud, and her mind started racing. Was someone breaking in? When it happened a third time, she started yelling at the door: “I have a gun, and I’ll use it!” What she heard next was the sound of children crying—the ones who had been throwing snowballs at her door and thought she was going to shoot them.

Source: The Search for Sanctuary – Nest- The Atlantic Sponsor Content

The singer and songwriter Bob Dylan, one of the world’s most influential musicians, was awarded the Nobel Prize in Literature on Thursday for “having created new poetic expressions within the great American song tradition,” in the words of the Swedish Academy.He is the first American to win the prize since the novelist Toni Morrison, in 1993. The announcement, in Stockholm, was a surprise: Although Mr. Dylan, 75, has been mentioned often as having an outside shot at the prize, his work does not fit into the literary canons of novels, poetry and short stories that the prize has traditionally recognized.

Take a selection of artworks by the most famous illicit artist in the world, add a city that’s passionate about its street art and a dash of controversy: the result is the new Melbourne exhibition The Art of Banksy.Named in 2010 as one of the 100 most influential figures in the world, Banksy’s career began in Bristol in the 1990s, where he enthusiastically participated in the city’s graffiti scene. In the early 2000s, he adopted stencilling as a technique, and became part of the art movement now called street art. Whereas graffiti involves a stylised calligraphy that centres on the repeated writing of an individual’s chosen name, or “tag”, street art allowed for a greater diversity of content and technique: with paste ups, stencils and layered images.